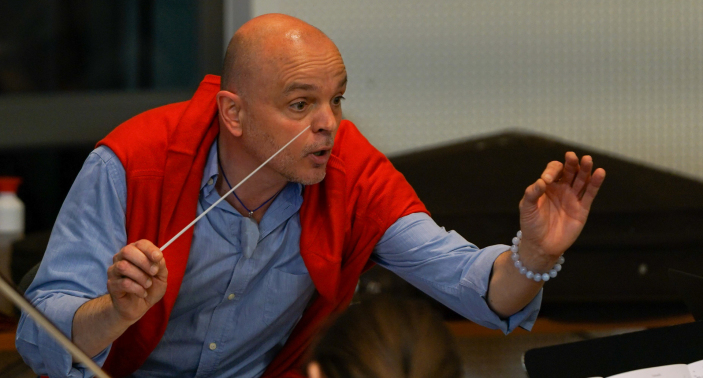 Peter Wolf, born in Vienna, has been working as conductor and artistic superintendent of the Youth Symphony Orchestra Vienna, the Youth Chamber Orchestra „Camerata Con Brio“ since 2005.  Before that, pedagogical work with young musicians of the „Jeunesse Children’s music camp“ near Graz has been great part of his artistic work.

The conductor, who was educated in Vienna, also played with the ORF Radio Symphony Orchestra Vienna as cellist. He conducted the orchestra on several concerts in Austria and abroad, for example on its tour through China. On several occasions he acted as assistant to head conductor Pinchas Steinberg and Dennis Russel Davies. Moreover he co-conducted at the Salzburg Festival, at „Steirischer Herbst“ and at the Festival „Wien Modern“.

As guest conducter he has worked with the Hungarian State Opera, several orchestra from South America, (f.e. Orquesta Filarmònica Nacional de Caracas), the viennese Ensemble for contemporary music „die reihe“ and many others.

In the Johann Strauß commemoration year 1999 his CD recording of the „G`schichten aus dem Wienerwald“ waltz and the „Tritsch-Tratsch“ polka by Johann Strauß with the  ORF Radio Symphony Orchestra Vienna celebrated a great success as the official giveaway for prestigious events hosted by the city of Vienna.

After his debut with the Vienna Chamber Orchestra at the Viennese Concert Hall and the Bruckner-House Linz a production with the Viennese Chamber Opera followed with „Marriage of Figaro“ at the Schlosstheater Schönbrunn with Ildikó Raimondi and Wolfgang Bankl as well as gala concerts with Gabriele Lechner, Ilona Tokody and Georg Tichy.

At 15 he was awarded the 2nf prize at the International Broadcasting Contest „Concerto Praga“, as well as the 1st prize at „Jugend Musiziert“ in Leoben for playing the cello. During ten years he performed with his brothers Reinhold, Markus and Thomas he performed  as the „Wolf-Trio“.

Coming from a family of musicians Peter Wolf completed his education at the Mozarteum Salzburg, majoring in violoncello as a student of Heidi Litschauer. Afterwards he graduated at the University of Music and Performing Arts Vienna, majoring in conducting as student of GMD Otmar Suitner. Broadcasting- and CD recordings are proof of his musical versatility.